Fill in the blanks

No internet is the worst. No internet + no tv + broken phone is just... there's not a word! Ive had to walk into uni to use the internet! Hey guys, guess where I'm going on Friday night? You guessed it, the library. I am too cool. This is the perfect and serendipitous segue into today's blanks which are school themed. As always, thanks to Lauren. 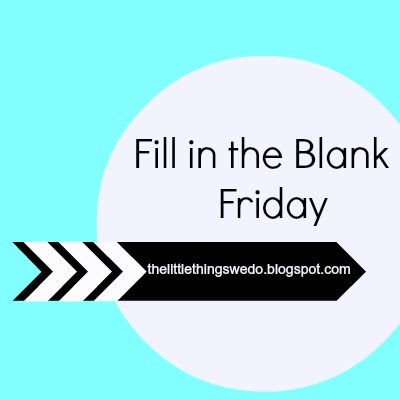 1.  My favorite grade in school was the last one. What is that in the American system? It was ace, you ruled the school and knew how everything worked, it was comfortable. Plus teachers were much nicer towards you.


2.  My favorite teacher was  hard to decide   because,  different teachers were the best at different times of my life .


3.  The highest level of education I have completed is  the first year of my psychology BSc.

4. School lunches for me were usually a basic sandwich, fruit and snacks. Nothing exciting until I started packing cereal or crudites for myself. Oh and chip day in the canteen, that was the best!


5. The amount of money you'd have to pay me to go back to high school would be enough for me to come and do as much further education as I liked without worrying about a job or loans. And then have some left over to travel with.

6. A few things that will always remind me of going back to school are:  the mad dash to the uniform shop when you realise your shirts all have holes in them and your skirt is too short.

7.  The first day of school was always  a really abrupt end to summer but the only day of the year you were truly organised.
Posted by Elly R at 20:40 No comments:

Email ThisBlogThis!Share to TwitterShare to FacebookShare to Pinterest
Labels: Fill In The Blanks Friday GAH YES IT WAS ON AND YES ITWAS AWESOME AND SO WORTH THE WAIT BUT SO MANY THINGS NOT EXPLAINED JUST HOW EVEN IS SHE COMING BACK AND WE WONT KNOW FOR AGES BUT RORY AND AMY LOVE FOREVER DOCTOR WHO? GOD I LOVE THAT SHOW. source

On an unrelated and non-hysterical note, although it might explain the Doctor Who hyteria, I'm going back to uni today and I've had 5 hours sleep and it's raining.
Posted by Elly R at 09:09 No comments:

Having my friend here has resulted in a glut of film watching, all of which I've been meaning to get around to watching but have been set aside due to my infatuation with sci-fi.

The other night, we watched the Hollywood, 2011 version of The Girl with the Dragon Tattoo.
I watched this film with an additional soundtrack. It was almost like the directors commentary but instead the script read something like this:

Oh Daniel Craig
He is so sexy
Mmm yes I'd get on that
No, he just put white plates on the table, these ones are glass
Look at the way he wears his glasses, they make him look so intelligent and hot
Why is he wearing his glasses below his chin? What is that?
He's so smart and attractive, I want him
Get him here for me
I want to be in Sweden, I miss the snow
I need to leave the UK
An English man would be too wimpy in the cold, I want to marry a continental prince.
(that's me in italics)

Yep so I was listening to someone lust after Daniel Craig while I picked out the flaws and tried to wrap my head around the film. It wasn't great at explaining what was happening as it goes along but if you're any good at remembering some of the earlier detail, you can put it together with not much difficulty nearer the end. The main thing I found hard was keeping all the faces distinct in my head. I often found myself thinking they were talking to the father when in fact it was an uncle or assistant! I couldn't stay on top of it all.

I was pretty impressed with Lisbeth and Mikael's investigative skills. Makes me want to be a PI and sneak around peoples houses at night and hack into their computer systems. So exciting! I think I have no firm idea of what I want in my future I just grab onto everything I see in films.
Posted by Elly R at 20:35 No comments:

So continuing in the vein of futuristic, adventure sci-fi, I watched The Time Machine.

I definitely still like the genre, it has a lot of scope and when you have gentlemen from the late 19th century wandering around in a waistcoat in the 802000s where they still speak English, what's not to like?
Posted by Elly R at 12:30 No comments:

I'm so near the end now, and having taken a long break, that I feel a renewed motivation to complete the ABC's list.


It's Saturday and the letter is V.
I'm a Vegetarian which means I eat a lot of Vegetables. Well, I should but I much prefer fruit. When I'm peckish I'd much rather have a tub or grapes or berries than veggies. Eating fruit is like eating sweets except you can eat loads and not get a guilty complex that follows you for the rest of the day.

So I guess you can tell I'm not a huge Vegetable lover, but the Vegetable I can't stand is luckily one I'm not often faced with. The dreaded Brussels sprout. Staple of the Christmas table and my Grandads favourite vegetable, I won't have them anywhere near my plate. Haunting memories of Christmases past where a minimum of 6 had to choked down before we were allowed to leave the table. 'How do you know you don't like them if you never try them?' Once every 5 to 10 years is often enough for me. And that grey, green colour is hardly appetising.

Thankfully, in recent years my mother has decided they're best cooked with lardons and I am not complaining. It's perfect! Freed from the Brussels sprout until my housemate makes bubble and squeak and fills the house with that... pungent smell.
Posted by Elly R at 12:30 No comments:

Email ThisBlogThis!Share to TwitterShare to FacebookShare to Pinterest
Labels: ABC's of me

Fill in the Blanks Friday

It's Friday and aren't we all celebrating.  I have extravagant new nails in preparation of a weekend with my uni friend, eating dinner with friends and re-exploring my hometown with fresh eyes.


1.  My favourite thing to do on Friday is  have a relaxing curry with the family or my friends. Or having a quick dinner and spending hours preparing to go out on the town .


2.   This Friday I am  buying a ton of new stuff for uni to make my room feel lovely and homey, then seeing my Nan and then manically tidying my room in preparation for my friend arriving to stay this evening .

3.  The best thing about a weekend is  late night BBQs.

4. Now that summer is almost over, I'm feeling   ready to get back into a routine, which I will soon get sick of. And to get back living down south so I can visit everyone.

5. The best thing I did this summer was  go around the country and visit friends that I hadn't seen in a while and haven't seen for ages since then. Miss them.

6. The thing I'm looking forward to about fall is  wearing boots and jumpers and scarves even in lectures. With my new glasses I'm anticipating looking fantastic... not! Oh and not having to worry if you haven't worn any colours other than black, white and shades of brown/nude.

7.  If I had to be stuck in one season for the rest of my life, I would choose autumn, hands down. Just the beginning where the summer days are still warm but the evenings get nippy so you can wear all your clothes but not have to worry about taking a coat everywhere. Plus, no sunburn.
Posted by Elly R at 17:16 No comments:

Email ThisBlogThis!Share to TwitterShare to FacebookShare to Pinterest
Labels: Fill In The Blanks Friday

The Matrix Revolutions.
This was the third of the Matrix films and I'm sad to say, my least favourite. Although it had me on edge the whole time and the fighting scenes were just as inspiring as the first two, I couldn't help feeling that the end was lacking.

I would have loved it to go out with a bang, or at least a tidy conclusion but they've left a lot of loose ends untied and questions unanswered. There are lots of rumours about a Matrix 4 and possibly 5 on the internet but no recent news about that. It's a shame, then end has been left open for Keanu to make a miraculous reappearance in another film and I feel that the ending has been compromised because of it. You could argue that by leaving it open the viewers can speculate about the future and the nature of the storyline at the end is that no one really knows what's happened but I can't stand films doing that. It just feels lazy to me.

So maybe another Matrix would be a waste of money. Personally I'm all for it, I want that ending cleared up please. If nothing else has come from watching 8 hours of sci-fi adventure, I'm now thoroughly motivated to join a martial art society at my uni and I'll be giving that genre much more consideration.
Posted by Elly R at 12:30 No comments:

It's been a while since I did one of these.
Today's letter is U and so I'll be telling you about underwear. 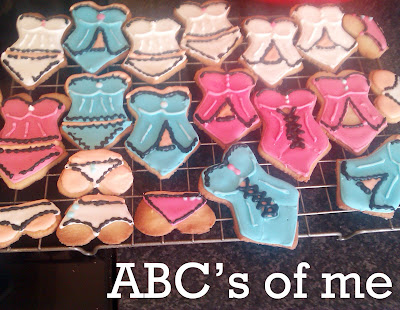 Well I definitely wear it. Every day.

I'm a girl and not flat chested so a bra is a necessity otherwise they just kinda get in the way and it hurts and no-one wants that. So I'm a 32D or 34C and a 10 on the bottom, just in case you'd like to send some nice underwear my way, creepy though that might be. I buy most of my underwear from La Senza but since I have to buy these things myself now, I also own some tesco, sainsbury's and primark underwear. Classy.

Oh yeah, and I made those cool lingerie cookies in the picture for my little sister, inspired by (basically a copy of) Sweet Sugar Belle's Lingerie Cookies. I'm too good to her. Definitely an appropriate cookie to serve at her 17th birthday.
Posted by Elly R at 12:30 No comments:

Email ThisBlogThis!Share to TwitterShare to FacebookShare to Pinterest
Labels: ABC's of me, Recipe

So captivated was I by The Matrix that it's 2.40am and I've just finished watching The Matrix Reloaded.
I think I'm developing a taste for this dystopian, sci-fi, action movie genre. It simultaneously challenges my ideas about the world we live on, our freedoms and our choices while at the same time inspiring me to take up a martial art and become Neo. It looks so cool with all the back flips and the defying gravity. If I could have that but none of the danger that would be great.

If my eyelids weren't aching for sleep I'd be getting the next matrix film ready right away. Ah well, another day.
Posted by Elly R at 12:30 No comments: